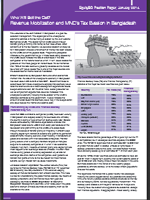 The weakness of tax administration in Bangladesh is a poor tax collection management. The largest part of the underground economic activities is the tax hiding or evasion by the Multi National Companies (MNC). The capital flight of MNCs occurs through transfer pricing or shifting the money to their head offices, sister
concerns or to the tax heavens. No exclusive research or study so far in Bangladesh showed what amount of money has been evaded by the MNCs out of the payable taxes. Proper and prerogative
initiatives by the government to pull in those taxes being evaded by the MNCs could increase the ratio of direct taxes in the total composition of the national revenue which, in turn, could release the
pressure on the mass people for indirect taxes. To be mentioned that, 75% of the total revenue is presently collected as the indirect tax where VAT (Value Added Tax) is one of the major sources and
the easiest tool for internal revenue mobilization.
Download the document [MNC Tax Evasion in Bangladesh] as pdf

Government to ensure minimum 2% of GDP resource as climate finance...

EquityBD observes 21 February: Use of local languages Recommended for local...