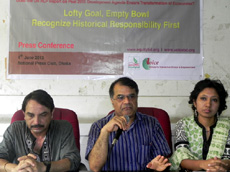 [Dhaka, Tuesday, 4 June 2013] Civil society right groups network EquityBD and VOICE in a press conference held at the city’s national press club criticized United Nation High Level Panel (UN HLP) report on post 2015 agenda terming it “as lofty goal and empty bowl” and said that the report is in fact a far short in transforming economies. The UN HLP report has just published on 30th June 2013 in New York. The UN HLP was co chaired by UK Prime minister Davide Cameron, Indonesian President Dr. Susilo Bambang and Liberian President Alen Johnson Sirlef. Moderated by Rezaul Karim Chowdhury, chief coordinator of Equitybd, the position paper was read out by Ahmed Swapan Mahmud, executive director of Voice.
Speakers criticized the UN HLP report for over emphasizing on free market and private sector financing for development. They said the report has not been able to strike a balance between private sector and public financing. They urged that free market notion is responsible for reproducing poverty and global inequality and widening the gap between rich and poor. They have also mentioned that generically private finance always look for profit rather than growth with justice and equity.
Speakers placed four points to the HLP and Secretary General of the United Nations to consider in the post 2015 development framework. The demands are (i) developed country must recognize historical responsibility, (ii) all LDC’s debt must be cancelled and there should not be debt creating instruments in the name of development assistance in future, (iii) democratic policy space must be created for LDCs and developing country in international financial institutions (IFI) like World Bank, IMF, and (iv) holding back arm race and army expenditure in countries to establish peace and security. The groups pleaded that country like Bangladesh should take lead in the intergovernmental process and raise voices well ahead for post 2015 development agenda.
Aminur Rasul Babul of Unnayan Dhara Trust, Farzana Akhter of VOICE and Mostafa Kamal Akanda of EquityBD also spoke in the press conference