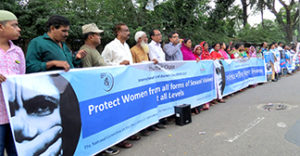 The organizers of the event mentioned that, this year the International Rural Women Day is being observed in 50 districts. As usual, this year this day will also be observed with different activities like human chain, rally, seminar, fair, award giving ceremonies to champions of protecting women right. Since 2000 Bangladeshi NGOs, CSOs has been observing this days with their own fund at national and local level under the banner of National Committee on Observation of the International Rural Women Day.

Ferdaus Ara Rumee said, in our country every day incidence of two rapes are taking place. Cases are filed for half of these incidences. very few of the cases can see the light of judgement due to long and complicated processes. Most of the alleged are coming out of the court using various loopholes of laws. Rate of judgement against rape cases is 3.66%, punishment has been ensured for only 0.45% cases. According to the Ain o Shalish Kendra, during the first seven months of this year total 424 rape cases have been recorded, 88 women and children have been victim of mass rape. Bangladesh Shishu Odhikar Forum says, during the first six months of this year 294 children have been raped.

Zayed Iqbal Khan said, in many cases poor parents are forced to compromise with alleged rapist getting some compensation. In most cases parents don’t want to file any case just to avoid any further harassments. On the other hand, plaintiff often lose interest on case due to negative legal harassments of the solicitor of the accused. We have to give up our tendency to blame the victim of rape, only the ill mentality of the rapist is the cause of rape.

Badrul Alam said, to raise the issues of rural women across the globe, this day is playing a significant role. To make a meaningful society we have to eliminate all sorts of discrimination between men and women. We have to guide our children on this, it must be included in our text books.

Shamima Akhter said, if we analyze the case of rapes of children, we will find that, most of the time the accused are relative of those children. Children of 13-18 years of age are being raped being seduced of marriages.
Please download related documents [Bangla Press] [[Bangla Press] [Leaflet]
Photos