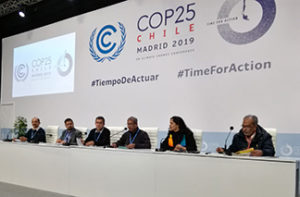 Presenting of key note, Aminul Hoque said that the ongoing performance and progress on CoP 25 negotiation is frustrated for us and there have no particular text and decision being finalized yet in the meeting of “Head of Delegations” already held towards implementing the Paris Agreement. He put four demand in favor of South Asian CSOs and called for urgent decision in CoP 25. The demands are i. As a response measure under Paris Agreement Developed Countries must increase the GHG reduction target and scale up its implementation, ii. No false solution would be arbitrated by Developed countries to vulnerable countries and LDCs in the name of “Market Mechanism and Cooperation, rather developed countries will take measure in their own country for GHG reduction, iii. Long term finance is an “Obligatory Responsibility” of rich countries as they were agreed as collective goal on mobilizing 100bln US$ finance prior to 2025 and onward that to be channelized without delay and iv. Developed countries must support to setting up an appropriate long term work plan with dedicated financial support for WIM to ensue need of vulnerable countries for managing Loss & Damage.

Sunil Acharya reiterated the LTF as an extremely important and only platform within the PA and its Convention that dealt with finance at a macro level, including dealing with both the technical and political levels. So that, we do not ready to see the LTF coming to an end by year 2020 rather it must be accomplished by 2030 according to the period of PA run at least.

Md. Shamsuddoha opined that this is a key opportunity for ministers and heads of delegation to engage on loss and damage. We think that the WIM review is a centerpiece for vulnerable countries, and prepare for a strong outcome on this issue at COP25. He also urge to take a positive and strong role by Standing Committee on Finance (SCF, that work on financial issue under Paris Agreement) for a separate financial mechanism to implementing Loss and damage related work plan.

Souparna Lahiri said that we can’t sold our people and their livelihood in the name Carbon trade and so called market mechanism and international cooperation. It’s a false proposal from developed countries that need to stop through raise our voice from all corner of vulnerable and developing countries.
Please download related paper [Bangla Press] [English press] [Position Paper]
Photos